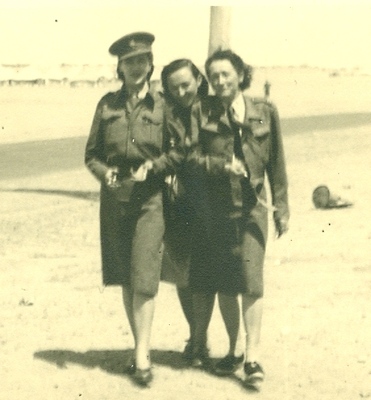 From left: Zofia Krzyżanowska (nee Zofia Wiśniewska; later: Zofia Drzewieniecki), Director, Polish YMCA in Palestine and Egypt; Anna Żerman (later: Anna Dubicki); Świśtowska, YMCA staff. Kassasin (Quassasin), Egypt, June 1944. Anna Żerman was a teacher in Poland. After the Soviet invasion of Poland in 1939, she was sent to a gulag. When the USSR joined the Allies, she and other Polish refugees were released to the Middle East. Ania married Bolesław Dubicki after WWII and they immigrated to Chicago. She was the best friend of Zofia Drzewieniecki) and later an "aunt” to Joanna Drzewieniecki.