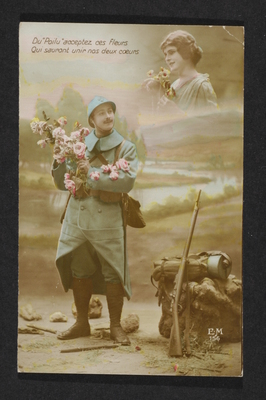 Although the dangers that a departing soldier might encounter were hinted at, the realities of war were largely glossed over. In August 1914 many Europeans on both sides of the conflict were convinced that the war would be over by Christmas. As is seen on these cards, known as the “Twilight Series” music from popular songs or hymns was often used to express the sender’s sentiments. This was a conventional practice, and one that in a famous instance, had helped to create an urban myth via a postcard.

Intimate portrait of a soldier and a woman