Patriot Series: A Letter from Dad (1) 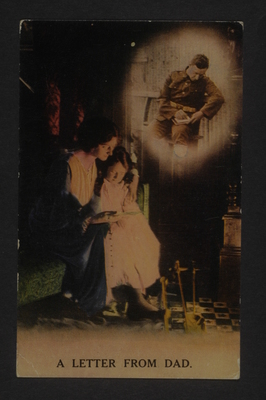 This series, oddly enough known as the “Patriot Series” , shows that Bamworths was reacting to the actual realities of war, including feelings of separation and loneliness, and the grief associated with loss. As the card in the lower right hand corner indicates, the series also demonstrates fears that the war would ultimately be meaningless.

Portrait of a child reading a letter from her father