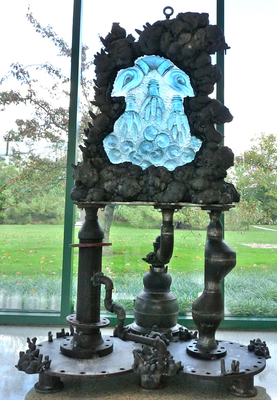 As if spuming forth from a roiling distillery, a cloud of iron entraps a delicate and luminous glass panel whose surface suggests a microscopic view into the contents of a petri dish. A strong contrast of evanescent light and obdurate iron poses a precarious balance between states of being, between fact and fancy.

Ancient Greek for "burning up", Phlogiston (φλογιστόν) was once accepted as a mysterious, elemental substance which was liberated from a fire’s source. This immeasurable energy was seen as being responsible for the complex phenomena of combustion and metabolism. The flawed 18th Century Phlogiston Theory grappled with what we know today as the process of oxidation, and effectively explained away a gap in scientific understanding. Today, a phlogiston has been used to describe phenomena beyond the full grasp of human comprehension such as the mechanics of quantum physics. It has also been invoked in the fractious argument surrounding climate change to discredit its science, or conversely, to accuse detractors of disregarding irrefragable fact.

Phlogiston is part of Eco Smut, a suite of predominantly cast metal sculpture. The artwork is a threnody to old energy and testimony to my personal, and moreover, the global struggle for material resources. Offering this sculpture for sale by the pound is a reaction to the whims of the free market- where commodification of a concept, essentially nothingness, is an emergent feature. Poised upon the rubicon, we gaze ahead searching for the next great discovery- a panacea for our energy woes- or to otherwise sustain the Faustian bargain of insatiable exploitation of finite resources. It is at this frozen moment that we are confronted with the stubborn obstacles imposed upon our collective imagination and will.

You break it you buy it.