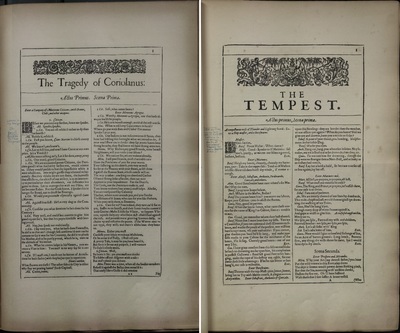 On the pages shown here, the marginaliast takes a close look at the decorative “B” initial that begins both “The Tempest” and “Coriolanus.” According to the marginaliast, there are letters to be found hidden within the ivy design and these letters, of course, spell “Francis Bacon.” The marginaliast makes a similar point about an upside-down decorative border earlier in the First Folio facsimile.

Upon examination here, the squiggles and flourishes behind the decorative “B” do not look very much like letters, even when the marginaliast separates them from the B and re-writes them in the margin. Additionally, as discussed previously, the marginaliast’s commitment to finding clues of Francis Bacon’s authorship overreaches his or her knowledge of the printing process. Such a decorative initial would have been chosen by the printer – not the author – and would likely have been a pre-cut wood block, not something specially made for any specific book. Thus, the odds of a secret message from the book’s author appearing in a decorative initial are extremely low.