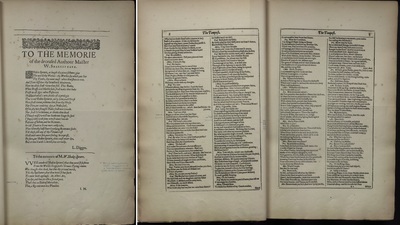 At left, poems by L. Digges and I.M. commemorating William Shakespeare are shown from the SUNY Buffalo State's facsimile of William Shakespeare's First Folio from 1866. At right, we see the second and third pages of 'The Tempest' in the same facsimile.

Throughout the SUNY Buffalo State First Folio facsimile (and as shown on these pages in particular), the marginaliast uses blue (and occasionally red) colored pencil in the margins and directly in the text to argue for Baconian authorship of the plays.

Colored pencils are a far more recent invention than many would think – the first colored pencils did not appear until the nineteenth century.[1] These early colored pencils were available only in blue and red and were used, not by artists, but by editors for “checking and marking.”[2] The reds and blues stood out from the black text, making edits easier to spot,[3] and “the blue pencil” became an iconic part of copyediting.

All the same, colored pencils remained a strictly professional tool well into the twentieth century. In 1906, The American Stationer ran a lengthy article explaining what a colored pencil was and how it might be used.[4] Clearly, the colored pencil had not caught on with the general public yet.