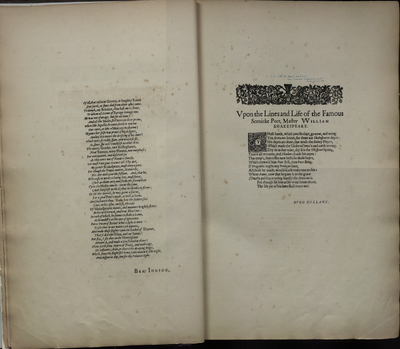 With the exception of one page, the marginaliast of the SUNY Buffalo State First Folio facsimile uses block letters, or printing, exclusively. Cursive handwriting was predominant throughout the nineteenth century and well into the twentieth, with block letters largely considered the purview of school children. In the nineteenth century, “good” handwriting (i.e. cursive) was seen as “a form of self-presentation” and was believed to reveal something about the inner self.[1]

By the mid-twentieth century, however, the prevalence of typewriters (and later computers) had caused a decline in the use of and value placed on cursive handwriting. The marginaliast’s use of block letters, rather than cursive, strongly suggests that s/he was writing in the early-to-mid-twentieth century after printing had become more widespread and societally acceptable.

That said, the marginaliast’s block letters are unlike other common forms of handwriting in that they mimic the font of the First Folio text, including serifs. Serifs are the decorative small lines added to the top and bottom of some letters as a form of embellishment. They are most common in older typefaces, like the one used in the First Folio, but are not typically used in handwriting.

The fact that the marginaliast’s handwriting includes serifs probably means that the penmanship isn’t his or her own – it is merely a mimicking of the font, which could mean the marginalia was written any time after the facsimile was published in 1866.