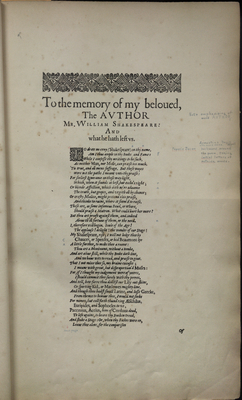 As shown on this page of the SUNY Buffalo State First Folio facsimile, an acrostic purporting to spell the name “Francis Bacon” is revealed by the marginaliast. Acrostics, in which certain letters from each line of a text are pulled to spell a name or message, were very popular in Elizabethan England[1] and became equally popular among Baconians seeking to prove definitively that Francis Bacon wrote the plays attributed to William Shakespeare.

One of the main benefits of acrostics is that any message found this way must have been placed there by the author. As cryptographers William and Elizebeth Freidman note, “to change or insert any hidden message would be impossible without changing the text. If, therefore, any genuine messages of this kind exist, they must be taken as conclusive.”[2]

This finality appealed to Baconians, particularly given their penchant for elaborate, and unprovable, ciphers. However, many Baconians stretched the rules of the acrostic to fit their needs, changing the number of lines or characters between the needed letters, moving backwards and forwards as needed to spell “Francis Bacon,” and using “equivocations,” or shortening and Latinizing names so that letters like “OCBA” could be read as “Bacon.”[3]

Perhaps the more prominent Baconian offender was William Stone Booth, who wrote an entire book on the subject called Some Acrostic Signatures of Francis Bacon in 1909. In his book, he guided readers through the First Folio, and numerous other books, to find acrostics revealing variations on the name “Francis Bacon.” Booth gained a large following with his book and wrote subsequent books on the same topic.[4]

[1] See William Walsh’s Handy-Book of Literary Curiosities: Composing acrostics “was carried to its most ridiculous and wasteful excess by the Elizabethan poets” (12). Also Friedman, 98.