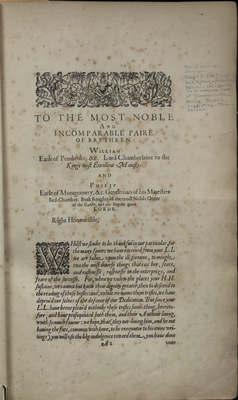 Dedication to William Earl of Pembroke and Philip Earl of Montgomery in the SUNY Buffalo State facsimile of William Shakespeare's First Folio from 1866.

In a few instances in the SUNY Buffalo State First Folio facsimile, the unknown marginaliast reveals an important fact about him- or herself: fluency in Latin. While Latin had historically been a universal language, after the eighteenth century, Latin was no longer actively used to communicate with others.[1] By the twentieth century, Latin had become purely historical, to the point where only specialists were fluent.[2] Latin continued to be taught in certain schools, but it was no longer a universally-known language.[3]

On the page shown here, the marginaliast writes “Baconi = Latin genitive (i.e possessive case) of Baconus,” illustrating his or her comfort with the language to the point of being able to identify the case of the Latin word and translate it correctly to mean “of Bacon.”

While some women in the Middle Ages were conversant in Latin[4], by the end of the nineteenth century, Latin was primarily reserved for upper-class men.[5] And since we know the marginalia had to be written after the publication of the Day & Son First Folio facsimile in 1866, fluency in Latin would likely point to a male marginaliast who had a classical, upper-class education in the late-nineteenth or early-twentieth centuries.