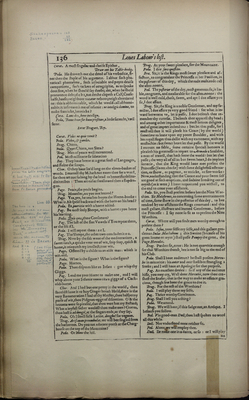 One page of 'Loves Labour's Lost' in the SUNY Buffalo State facsimile of William Shakespeare's First Folio from 1866.

So what have we learned about the marginaliast?

First, that s/he was a staunch Baconian, well-versed in some of the most popular Baconian ciphers and theories. As shown on this page, the marginaliast unpacks the Latin word honorificabilitudinitatibus, popularized as a Baconian anagram in Edwin Durning-Lawrence’s 1920 book Bacon is Shake-Speare. Supposedly, the letters in honorificabilitudinitatibus can be rearranged to spell a Latin phrase translated (as the marginaliast does) as “These plays concealed in themselves from Fr Bacon proceeded.”[1] Discussion of the “long word,” as it was known, became a touchstone of Baconian cryptography.

Fourth, judging by the Latin fluency displayed on the page shown here and elsewhere in the facsimile, the marginaliast was likely a well-educated, probably wealthy, man. This idea is further supported by the marginaliast’s use of the Oxford English Dictionary and ownership of the First Folio facsimile itself. Only five facsimile versions of the First Folio were produced between 1866 and 1954[2], meaning it was likely difficult to purchase such a facsimile in the 1920s and -30s. The marginaliast likely had the education and wealth necessary to procure it.