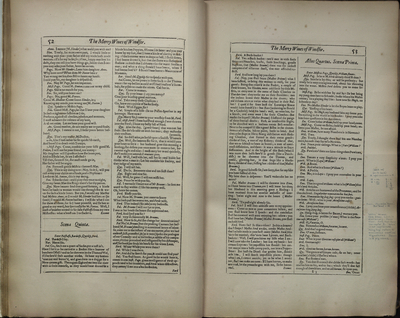 Two pages of 'The Merry Wives of Windsor' in the SUNY Buffalo State facsimile of William Shakespeare's First Folio from 1866.

In April 1928, the last volume of the monumental Oxford English Dictionary (OED) was published. It contained over 400,000 words, with each given its own history of use to explain to dictionary users how the meaning of a word might change over time.[1] It was the first dictionary to explore the evolving meanings of words directly and cost between 50-55 guineas when it was released in 1928[2] – the equivalent of over $4,000 in today’s currency.[3]

As shown on this page of the SUNY Buffalo State First Folio facsimile, the marginaliast reveals another clue about him- or herself: access to the OED. Noted in the margin of this page is, “‘latten’ means thin brass. Look in dictionary. Same then [emphasis added].” Since the OED was the only dictionary at the time to provide information related to the historic meaning of any given word, it is safe to assume that the marginaliast used the OED to determine that the definition of “latten” had not changed since the 1600s.