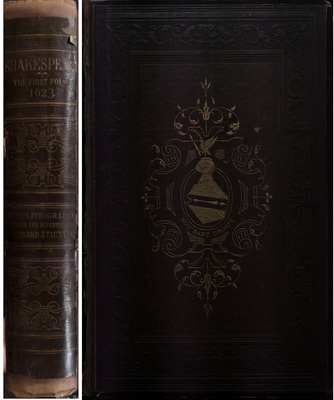 Before long, the First Folio was considered the definitive version of Shakespeare’s plays and was prized by theater-lovers, bibliophiles, and Shakespeare fans the world over. With the invention of photolithography in the nineteenth century, copies (or facsimiles) of the First Folio became accessible to an even wider audience.

SUNY Buffalo State Special Collections is home to one such nineteenth-century reproduction of the First Folio, one released to celebrate the three hundredth anniversary of Shakespeare’s birth in 1864. Many identical facsimiles were published in the 1860s, but SUNY Buffalo State’s copy is unique. Why? Because it contains extensive, handwritten notes in the margins (called “marginalia”) that do not appear in any other copy.

Using secret codes, mathematics, and close readings of the plays’ text, an unknown scribbler believed there was “something surely hidden” within the First Folio: that it could be used to prove Francis Bacon was the true author of the plays, and not William Shakespeare.

But who was this mysterious marginaliast? When did s/he write? And is it possible Francis Bacon was the true author of Shakespeare’s famous plays?

By studying the notes and theories left behind by the marginaliast, we can try and solve these historical mysteries. Click on the images of below to explore SUNY Buffalo State’s unique First Folio facsimile and help solve the mystery of the marginaliast.