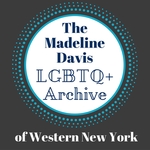 The Historical Development of the Gay Community in Buffalo, NY

Topics include: the evolution of the Mattachine Society of the Niagara Frontier in the 70’s as a reaction to the closure of gay bars; the first large community event put together by Frank Russo and Madeline Davis; gay parishioners at Buffalo churches and synagogues; the establishment of the Buffalo Gay Community Center in 1973 as the only community/self-supported center in the country; their sense of the gay community; the split between gay men and women in the late 1970s; evolution of the community as strong, but fractured; development of the Gay and Lesbian Youth Services (GLYS) as the only community safe space for youth with government funding; the inappropriate association of gays with pedophilia; the formation of NYSCGO from the Mattachine Society; an active discussion on Judaism and homosexuality; historical locations of gay communities within the city of Buffalo and suburbs; Rainbow Spirit Rising and growth of the Gay Pride Parade; and discussions of Buffalo as a big town with a small town mentality and the difficulties of being out and gay.

This oral history audio was recorded as part of a Master’s Thesis written by Justin P. Azzarella and belongs to the Madeline Davis LGBTQ Archive of Western New York housed at SUNY Buffalo State, Archives and Special Collections. More information about the original cassette, the complete collection, and copyright can be found at: https://library.buffalostate.edu/archives/LGBTQ