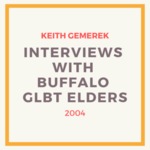 Sam Loliger and Don Behr were two of the participants in the 2004 Keith Gemerek and Madeline Davis Interviews with LGBTQ+ Elders of Buffalo project. The interview project was sponsored by the Mid-Atlantic Foundation and CEPA Gallery. Sam and Don were together from 1976 to January 2014 when Sam passed due to illness and both were active members of and advocates for the LGBTQ+ community of Western New York.

Loliger met Behr in 1976 while sitting on his interview committee for a position within the United Church of Christ congregation. After the two moved in together in ‘77, they participated in several support groups, advocacy organizations, and community associations, both individually and as a couple. Sam, for instance, served as national co-coordinator for the UCC Coalition for Lesbian & Gay Concerns for 13 years from 1984 to 1997. He was also a professor of sociology for Niagara Community College from 1964 to 1999. During that period, he chaired an affirmative action committee that approved a non-discrimination policy regarding sexual orientation in advance of SUNY’s own adoption of a similar policy. Sam extended his regional activism by serving as a representative for the LGBTQ+ community of WNY on the New York State Human Rights advisory committee.

Don was a member of the Gay Men’s Chorus of Buffalo, beginning at its inception in 2001. He spoke in the interview about the name of the chorus incorporating the identifier of ‘gay’ as representative of his experience being out-- that facet of his identity is not only out, but emphasized as a source of public pride. He considered the chorus and its music a form of outreach and a means by which to forge connections across communities. Sam and Don together attended meetings with the Mattachine Society, a gay parenting group, and Gay Naturists International, and also gave presentations at local colleges and sat on panels regarding LGBTQ+ identities in WNY.

Both Loliger and Behr were open and proud about their identities as gay men. Sam spoke in the Elders Interview about how he brought that facet of himself into every activity he did and joked that he would bring it up to people he met within the first 5 minutes of meeting them. The couple seemed optimistic regarding the future of LGBTQ+ liberation and considered it an honor to be members of such a vastly dynamic community. The couple married in 2012, 36 years after coming together and 8 years after the interview in 2004. Toward the end of the interview, they criticize the LGBTQ+ activist movement for championing equal marriage over other pressing issues, but ultimately recognize it as a political act.

The Dr. Madeline Davis LGBTQ Archive of WNY houses a 41-minute audio interview (including written transcript) with Sam Loliger and Don Behr, as well as a portion of Sam’s collection of political buttons and pins.