Figures: Albert, Glory to the Allies (1) 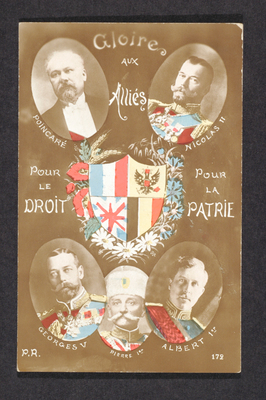 Albert was the King of Belgium during the war. In August 1914, he rejected German demands to attack France through his country, and attempted to remain neutral. Ultimately, he went to war with Germany and led the Belgian army. The German occupation of Belgium deeply impacted the country and its territories. Whole cities were destroyed. Albert personally led his armies as a military leader. For his actions and his bravery, Albert was proclaimed a hero at the end of the war and is still considered one of Belgium's greatest figures.

Representation of the allied heads of government: Nicholas II, George V, and Poincaré. The message is that allies need to be united, and that together, they will be stronger. « For the right » is very interesting because it means that their cause is the correct one, they are fighting on the right side.