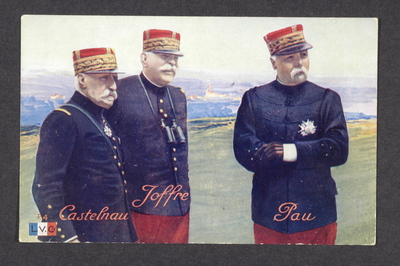 Joffre graduated from the prestigious Ecole Polytechnique before embracing a military career. During World War One, he was appointed Commander-in-Chief of French forces from the start of the conflict to the end of 1916. He led the army in very important battles like the first Battle of the Marne and the Battle of Verdun. Throughout his command, he adopted an offensive strategy, the plan XVII. In December 1916, he was removed from command, but was promoted to Field Marshal. He had to endure many critics who regarded his offensive strategy as reckless, and the source of heavy casualties. He was replaced by Robert Nivelle.

Representation of Joffre, Castelnau and Pau, some of the most renowned military figures in France. They represent an idealization of France’s leaders. They are men of duty, men of honor, who will bring France to victory against Germany.