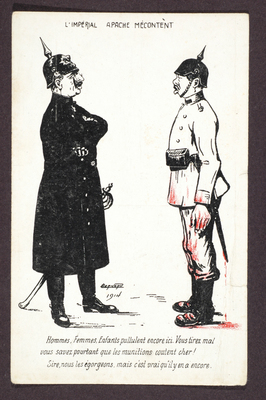 The German army is depicted as violent and inefficient. First, they say that they are not able to shoot even though their weapons are expensive. Then, the soldier tells his officers that he will slaughter the French. The text appeals to the image French people have of German soldiers.

Translation: Men, women, and children are still here. Your ammunition is expensive but you still shoot poorly. Sir, we will slaughter them but many people are still here.