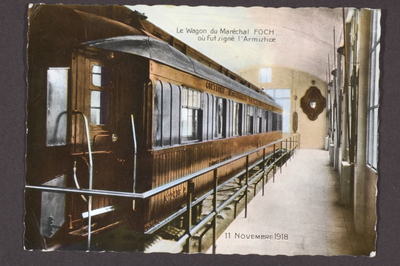 Foch was one of the most renowned figures in the French army. He was promoted Lieutenant-Colonel in 1898 and Colonel in 1903. By 1911, he was appointed General of Division. His role in the First World War was essential, especially in the Battle of the Marne at the beginning of the war. In October 1914, he was made Assistant Commander-in-Chief of the Northern Zone under Joseph Joffre and, by 1915, he commanded these troops. In December 1916, he was sent to the Italian front to command allied units. In 1917, he became Chief of the General Staff. He led the troops that made Germany surrender in November 1918 and was in charge of peace negotiations with Germany. At the end of the war, he argued that Germany should be punished for causing the war. According to Foch, the Treaty of Versailles was not harsh enough.

Picture of the carriage where the peace treaty was signed. It means a lot to French people because it ends a four and half year war with almost a million and a half casualties. This is the revenge for which France had been waiting for so long. It ends the humiliation of the Franco-Prussian war.