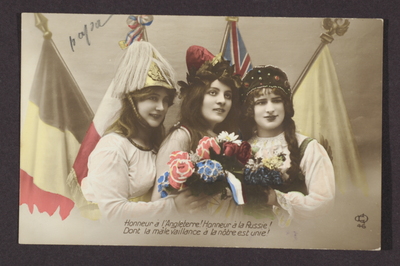 It praised the allies' courage. Two things are particularly relevant here. First, the allies are depicted as women, again representing purity and innocence. Then, the text mentions a "male courage" which was a typical phrase from the patriarchal society of the early 20th century which praised the male values of courage and honor. Therefore, the allies embody both female and male values.

Translation: Honor to England! Honor to Russia! Their male courage is united to ours.