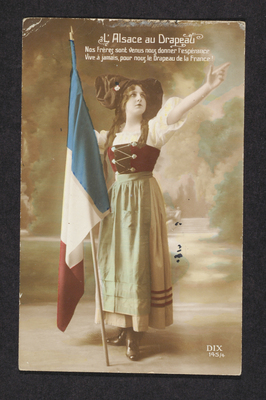 In 1914 France and Germany shared a very conflicted common history. Prussia won the war of 1870 against France and kept the border provinces of Alsace and Lorraine as a reparation. Peace was signed in the Hall of Mirrors at the Palace of Versailles where, in addition, Otto Von Bismarck pronounced the unification of Germany. It was seen as a tremendous humiliation for the French people. Future generations were raised to hate Germany. In some quarters, there was an expectation that, sooner or later, France would seek revenge and bring Alsace-Lorraine back in the nation. During the First World War, therefore, propaganda was used to demonize the enemy. German soldiers were thus depicted as brutal; raping French woman and destroying French cities. The goal was to build an image that France was on the ‘right side,’ fighting against the forces of evil. German soldiers were compared to Huns, who held barbaric values. The effort helped to rationalize the rejection of premature peace proposals, and ensured that severe terms would be imposed once the peace was signed. After the war, the French people had become convinced that the war was Germany's fault, and that severe reparations were therefore justified.

This is a typical card justifying the purpose of the war which is also to liberate their "French brothers" in Alsace from Germany. The territory had been taken after the Franco-Prussian War of 1870.

Translation: Alsace to the flag. Our brothers have arrived to give us hope. Long live, to us, the French flag!