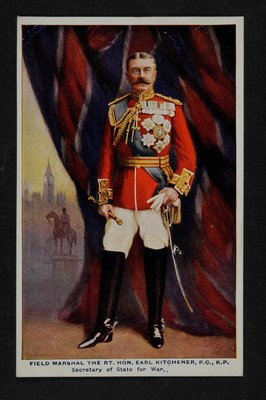 Kitchener had been one of the few prominent British military personnel to predict a lengthy war when fighting ensued in Europe in the autumn of 1914. Famous for gracing Britain’s recruitment posters, he succeeded in forming an enlisted army of more than one million men. (DSC4281) He drowned in June 1916 while en route to Russia, when his ship struck a German mine off the coast of the Orkney Islands.